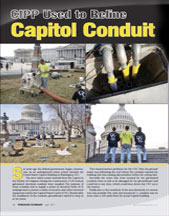 CIPP or cured in place pipe formerly known as Insituform, is being utilized more frequently due to advances in technology. Pipe lining is gaining popularity for it’s ability to skip digging and reline pipes without digging.

Six years ago the federal government began construction on an underground visitor center beneath the United States Capitol Building in Washington DC. The new visitor center extends from the Capitol to the Library of Congress. During the construction, 114-ft vertical, galvanized electrical conduits were installed. The purpose of these conduits was to supply a series of electrical wires 40-ft underground to power a series of security and other electrical equipment within the Capitol Visitor Center (CVC). Shortly after the installation of the conduits, groundwater started to seep in at the joints.

This water was creating serious problems for the CVC. First, the ground water was infiltrating the roof where the conduits entered the building; this was causing discoloration  within the ceiling tiles. Secondly, the wires that were incased by the galvanized conduits were at risk to be damaged by the groundwater and could fail at any time, which could shut down the CVC security system.

Finally, due to the sensitivity of the area absolutely no excavation was possible. The vault that housed all 11 conduits was no more than a 100 yards from the actual Capitol Building.

Dynamic Drain Technologies out of Virginia Beach, VA, was approached by the general contractor to come up with an application to stop the water infiltration without disrupting the Capitol grounds without any excavation.

Dynamic Drain Technologies was founded to bring cost-effective, cutting-edge sewer and drain technologies to the Mid-Atlantic region. The contractor offers a wide variety of residential and commercial sewer and drain services, such as cured-in place pipe (CIPP) renewal, CCTV pipe inspections, pipe bursting and water jetting. Dynamic Drain is also a certified Perma-Liner installer using its Inversion System and offers industrial and municipal services. The contractor services North Carolina, South Carolina, Georgia, West Virginia, Virginia, Delaware, Maryland, New Jersey, New York, Tennessee, Washington DC, Mid-Atlantic and Pennsylvania. A time frame of less than three days was also in place once the project was started because of security and the fact that the Capitol Visitor Center was already open and was housing events each day. A lightweight, fast pipelining system that would not create any harmful odors in order to not disturb visitors was needed; Dynamic Drain went with its Perma-Liner pipe lining technology.

This would allow Dynamic Drain to install an epoxy-felt liner within the broken initial
diameter of the conduits. The liner was a good idea because it barely reduced the initial diameter of the conduit and it would be a seamless brand new structural pipe from end to end. This would allow the electrical contractor to string new wires without the risk of getting caught on joints and stripping the wires. The Perma-Liner Inversion System allowed Dynamic Drain to install four liners a day in order to meet the Capitol Visitor Centerʼs time requirement of three days. The 100 percent solids epoxy created no alarming odors.