Excessive infiltration/inflow may cause sanitary sewer overflows during wet weather

What do you know about infiltration and inflow? 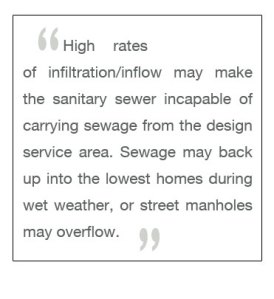 Infiltration is defined as Groundwater entering sanitary sewers through defective pipe joints and broken pipes. Leaky pipes can be caused by careless installation or from damage after installation by differential ground movement, heavy vehicle traffic on roadways above the sewer, careless construction practices in nearby trenches or just degradation of the sewer pipe materials over time. Most importantly, if left unattended the volume of water entering the sewer systems will gradually increase over time.
Infiltration occurs where groundwater elevation is higher than the damaged sewer pipe. Gravel bedding materials in sewer pipe trenches act as a French drain. A French drain is also known as a weeping tile (also blind drain, rubble drain, rock drain, drain tile, perimeter drain, land drain or French ditch) covered with gravel or rock or containing a perforated pipe that redirects surface and groundwater away from an area. A French drain can

have perforated hollow pipes along the bottom (see images) to quickly vent Groundwater flows parallel to the sewer until it reaches the area of damaged pipe. In areas of low groundwater, sewage may exfiltrate into groundwater from a leaking sewer.

Inflow -Water entering sanitary sewers from offset connections is called inflow. Typical sources include roof drains, cellar drains, and yard drains where urban features prevent surface runoff and storm drains are not conveniently accessible or identifiable. Inflow occurs mostly during precipitation events and causes greater flow variation than infiltration. Sources of inflow can sometimes be identified by smoke testing. Smoke is blown into a sewer during dry weather while observers watch for smoke emerging from yards, cellars, or roof gutters.

Significance -When these water sources become diluted with each other they become hazardous to the public when there is a risk of human interaction. Contaminated water sources must be heavily treated and monitored to minimize the risk. Also, losing sanitary water supplies is becoming a more monitored resource as our water supply is becomes more scarce. High rates of infiltration/inflow may make the sanitary sewer incapable of carrying sewage from the design service area. Sewage may back up into the lowest homes during wet weather, or street manholes may overflow

Correction -Smoke test results often don’t correlate well with flow volumes; although they identify potential problem locations where sewage flow is expected to be relatively uniform. It may be necessary to replace a section of sewer line if flow differences cannot be corrected by removing identified connections.