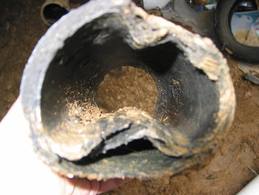 Orangeburg pipe is also known as, fiber conduit and Bermico.

These pipes were not meant to last long, it has done the job for quite a while but is now becoming more of a hassle to repair when it collapses. Any sewage maintenance system or conduit installation utilizing this fiber pipe is in danger of it’s condition beginning to fail.

This cardboard-textured material is slowly being crushed by dry soil or attacked by trees, grass and plant roots. Since orangeburg is basically rolled paper, water will separate the material and cause damage. When it is hot trees get hungry. There’s nothing more appealing than a fresh nutrient-rich sewer supply.

Industry experts advise that the best bet for homes or businesses with orangeburg is to replace the material before it causes major sewer backups and serious leaks. If your house was built before 1970, the Orangeburg needs to be replaced.

Thousands of homeowners with sewer pipes made from this inexpensive alternative to metal are now wearing out. If your community has this type of pipe in its sewage conveyance system (as either a mainline material, or, more likely, for private house laterals), find out where it is and start thinking about verifying its condition and/or replacing it.

Past Uses of Orangeburg

Cross-sections for electrical conduit systems have been utilized in the major construction jobs of the past such as New York Park Avenue Tower and the Empire State Building — along with other skyscrapers in New York City and other cities. Demand for the fibre conduit rose even higher during World War II in constructing the armed forces’ new airfields and military bases.

Furthermore subways were being built beneath the larger eastern seaboard cities; fibre conduit was being used in mass to contain electrical, telephone, telegraph, etc., wiring within the subway tunnels. It was also used to create underground duct banks for electrical, etc. distribution under streets and roads; and in direct burial situations along railroad rights-of-way to carry wiring. Dynamic Drain Technologies has seen and repaired pipes underground in the subway systems of New York without disrupting the normal workflow of the system.

Orangeburg pipe was made in diameters from 2 inches to 18 inches out of wood pulp sealed with hot pitch. Joints were made in a similar fashion and were able to be sealed by screwing together pieces. Orangeburg was lightweight, albeit brittle, and soft enough to be cut with a handsaw. Orangeburg was a low cost alternative to metal for sewer lines in particular. Lack of strength causes Orangeburg pipes to fail more frequently than other pipes. Orangeburg pipe usually lasts about 50 years under ideal conditions, but has been known to fail in as little as 10 years. It has been taken off the list of acceptable materials by most building codes.

For more on the history of orangeburg pipe and it’s origins in Orangeburg, NY please read:
http://en.wikipedia.org/wiki/Orangeburg_pipe