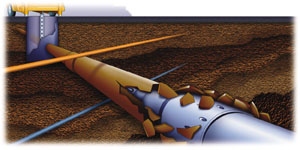 Pipe bursting is a trenchless system for replacing buried pipelines without the need for digging traditional construction trenches.

It has been used for many years to repair sewer, water, or natural gas pipes. “Dual-Access pits” replace the trench needed by conventional pipe laying.

Pipe bursting has advantages and disadvatages; it requires the excavation of two access points and there is debris left behind from using this technique.

Pipe bursting is the ideal technique to use for the rehabilitation and replacement of utility lines such as gas, water, sewer, telephone, and power. This method efficiently bursts clay, concrete, cast iron, and PVC pipe and is the perfect solution for up-sizing a sewer or storm line.

Using the constant tension wench, the old pipeline is shattered using a high-powered tool with special bursting heads that smash through the old pipe while pulling through the new replacement pipe. When inserted, the bursting head breaks the pipe into pieces, enlarges the hole, and pushes the fragments into the surrounding soil. This limits pipe bursting to pipes that can be fractured and to soil conditions that will absorb the old fragments.

The Way Of The Pipe Bursting Clan

This method utilizes an expanding device called an expander head that is pulled or pushed into the defective pipeline through a launching pit. As it moves to the receiving pit, the pipeline breaks the existing pipe into many small pieces, pushing the pieces into the surrounding soil. A new pipe that is attached to the back of the expander head replaces the pipe line.

When inserted, the bursting head breaks the pipe into pieces and enlarges the hole. This limits pipe bursting to pipes that can be fractured and to soil conditions that will absorb the old fragments.

Tools Of The Trade

The expander heads have a small leading end and a trailing (bursting) end small enough to fit through the existing pipe. The smaller end guides the expander head through the existing pipe on a magical journey; earlier methods produced heartache and lost course at times resulting in incomplete pipe bursts, project failures and neverending quests to restore pipe stability in our land.

The bursting head can have “fins” that make first contact with the existing pipe. Using these fins, the primary breaking point is determined and will ensure that the pipe is broken along the entire circumference.

A heaving machine is set in the receiving pit that will pull the expander head and new pipe with all it’s might into the line. The head is pulled by heavy chains that can weigh as much as several hundred pounds.

This equipment used in a pipebursting operation is powered by one or more hydraulic power generators.

Other Reasons To Utilize This Force

Pipebursting can also expand pipeline carrying capacity or “upsize” the Pipe. Extensive studies done by the gas and water industries has demonstrated the feasibility of upsizing gas, water and sewer mains. Upsizing is well established, and pipes all across the world have been replaced and influenced by this technique.